Why Mindfulness Is the Athlete’s Secret Weapon

The phrase “sports are 90 percent mental and 10 percent physical” is often said—but how often do we take it to heart?

Generally, the mental strength of an athlete will go a long way toward determining their success in their respective sport. But what is mental strength, and how can we build it?

According to Professor Peter Clough and Dr. Keith Earle:

Mental strength is the capacity that an individual has to deal effectively with the stressors, challenges and pressure to present their best performance in spite of their circumstances.

Now the question is how to build this mental strength.

One of the most effective ways to build mental strength is through mindfulness—which is simply being attentive and aware in the present. It sounds so simple, but very few people (athletes included) truly live in the moment. If you’re thinking of a bad play you made earlier in the game or the pressure that will come during crunch time late in the game, you are not being mindful.

Many people use meditation as a way to build mindfulness and ultimately bring their mind into the present. While being in the present, people have the capability of eliminating all distractions. These distractions can include past thoughts, future worries and a multitude of issues that take the present moment away.

Many athletes will spend countless hours working on their physical shape, but will never take the time to build mental strength. Therefore, it will be very difficult to make it through real life situations and in-game moments that require a resilient mindset. Mind fitness through meditation can build this resiliency through a process called neuroplasticity. This process can help athletes build a certain level of toughness that will help them recover and deal with psychological stress.

While mindfulness might sound like a big topic, working toward increased mindfulness can be quite simple. One of the biggest steps to successfully practicing mindfulness is the idea of focusing on the breath. By simply focusing on the breath and learning to control the mind, an athlete can gain an incredible amount of leverage on their opponent. They can become more focused and avoid distractions, while being able to control themselves better in the most emotional of moments. This grasp on the mind can do wonders in sports, and it is the reason that some of the greatest athletes in history have been able to stay calm in the most hectic of moments.

“You communicate internally with yourself at about 800 to 1,400 words per minute,” Trevor Moawad, Director of Mental Conditioning at IMG Academy and owner of Moawad Consulting Group, once told STACK. “So your subconscious has a lot of stimuli that are consistently affecting it.”

Michael Jordan and Kobe Bryant are examples of players who have remained calm in the most crucial moments—and that could be largely due to the fact both played for coach Phil Jackson, who practiced mindfulness with his teams.

Jackson took ideas from George Mumford, who is a sports psychologist and mindfulness expert, and believed they could benefit his teams. Jackson bought in fully and allowed Mumford to teach this idea of mindfulness to his basketball teams. Jackson had mindfulness sessions for his Kobe-led Los Angeles Lakers teams and his Jordan-led Chicago Bulls teams—who ended up being two of the most dominate teams in NBA history.

“It’s so vital for a team to have this skill, or players to have this skill,” Jackson told Ian Begley of ESPN. “To be able to divorce themselves from what just happened that’s inherent to them—a referee’s bad call, or an issue that goes on with your opponent. You’ve got to be able to come back and center yourself again.”

Bryant now meditates every day and referred to Mumford as one of the most influential figures in his life.

Mumford sat down with ABC News’ Dan Harris on his live stream podcast show, and explained his approach when walking into an NBA locker room. “First I talk about being a warrior, like a samurai … but also about ‘the zone,'” he said. “They know what ‘the zone’ is, they know what ‘being in flow’ is, so when I talk about that, they’re all ears.

“Meditation is not trying to go anywhere or do anything, meditation and being present is just seeing what’s there and letting it speak to you,” Mumford continued. “The goal is to be present to what is.”

This practice of meditation and mindfulness is not just for NBA players or professional athletes. Amateur athletes can benefit tremendously from this practice, and eliminate all distractions in the most disruptive moments. LeBron James, Derek Jeter, Misty May-Treanor and Kerri Walsh are some other examples of professional athletes who meditate on a regular basis.

There are many types of meditation that can help increase mindfulness, and there are many phone apps that provide guided meditation. If you are an athlete or just a person who wants to build up your mental strength, utilizing one of these could be the most effective way. The iWatch’s “Breathe” function is even a simple way to bring attention to your breathing.

If you want to forgo technology, you can follow the advice of sports psychologist Dr. Michael Gervais, who’s worked with teams like the Seattle Seahawks and U.S. Olympic Women’s Volleyball. Start by focusing on your breath for just a couple minutes a day, either in the morning, the evening, or just prior to your competition. Find a quiet, comfortable place to sit, close your eyes, and bring your full attention to your breath. Inhale slowly, feeling your belly rise, and then exhale, feeling the air leaving your body. “Begin with a commitment to just 10 breaths a day, and then move to 15 breaths in a row per day, then 20,” Gervais recommended to STACK.

When you notice your attention drifting away from you and focusing on things like external sounds, physical sensations, past memories or future worries, bring your attention back to your breath. Over time, you will get better at keeping your focus on your breath and being truly present. As your practice increases, you can extend the amount of time you spend each day focused on your breathing. 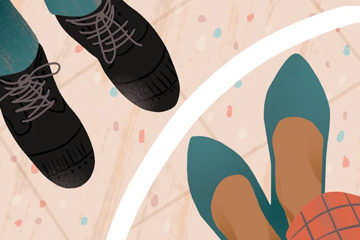 The Power of No: A Guide to Setting Boundaries

Emotional boundaries are the hypothetical “do not cross” lines of any interpersonal relationship...