Chrissy Teigen has opened up about the grief she feels after suffering a miscarriage at the beginning of October.

Taking to Twitter yesterday in the aftermath of the news that Meghan Markle experienced a miscarriage in the summer, Teigen explained why she hadn’t been tweeting much in the aftermath of her loss, painting a picture of the grieving process she continues to endure.

“I’m not tweeting much because I’m honestly in a bit of a grief depression hole,” Teigen wrote, “but do not worry as I have so much help around me to get better and I’ll be fixed soon.”

Adding her signature touch of humor to the message, she added: “They’ll call when I’m better and ready for pickup and you can swing by and grab me, OK? Thank you and love you!”

I’m not tweeting much because I’m honestly in a bit of a grief depression hole but do not worry as I have so much help around me to get better and I’ll be fixed soon. they’ll call when im better and ready for pickup and u can swing by and grab me ok? thank u and love you!

Her words come after Teigen and her husband, John Legend, appeared on Good Morning America earlier this week in their first live interview since they announced their loss.

Speaking about her grieving process, Teigen explained how she has given herself permission “to feel complete and utter grief” and take every day as it comes.

“Every day is so different, so when people ask me how I’m doing, I always say ‘I’m OK – today’,” she said. “Obviously it’s so painful to go through something like this, as a woman – something that was inside your body that you were nurturing and taking care of.”

Reflecting on the couple’s decision to share photos of the miscarriage on social media, Legend added: “[Chrissy] felt like really, that one of the ways we could carry on Jack’s memory was taking pictures of that moment. I was worried, I was like ‘I don’t want to commemorate this pain’.

“But the crazy thing about having a miscarriage, is you don’t walk away with anything – you have this emptiness – and we wanted to take the photos so that we had something to remember.”

He continued: “I didn’t know that we could experience this grief and also share it, but when we did it really meant so much to so many people. And it was such a powerful experience for me to learn that. I’m just grateful that my wife was courageous enough to do that.”

Besides the fact that Teigen and Legend’s decision to share their miscarriage on social media has shed light on an experience which often remains unspoken, their choice to verbalise their grief in such a raw and emotional way is a powerful reminder of the painful reality so many people suffer in silence.

Earlier this year, the largest ever study into the psychological effects of early pregnancy loss – ectopic pregnancy and miscarriage before 12 weeks – found that nearly a third of women report suffering post-traumatic stress a month after the loss, with one in four experiencing moderate to severe anxiety and one in 10 reporting moderate to severe depression.

Although Teigen’s loss happened at 20 weeks – a bit later than the losses represented in the study – it’s evident that the emotional turmoil of miscarriage and baby loss is not talked about enough.

With this being said, Teigen’s – and now Markle’s – decision to open up about the experience of miscarriage – including how loss impacts men, too – is incredibly important.

By giving voice to an experience that so many women and men continue to suffer in silence, both Teigen and Markle have provided us all with an opportunity to talk about a reality that often goes unnoticed – and that’s something they should be proud of.

For more information and support on dealing with miscarriage, including emotional support following a loss, you can check out the baby loss charity Tommy’s or visit the NHS website.

Posted by: Lauren Geall at Stylist.co.uk 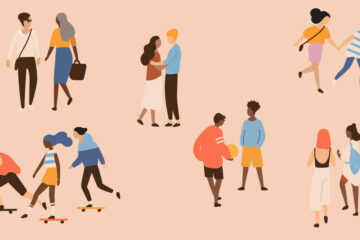