Your donation will go a long way in making a positive impact in someone’s life, maybe even yours.

For the longest time non-alcoholic (NA) beer was pretty cruddy, because only cruddy breweries were making it. In other words, it was the big brands’ lightest “lite” beer. But many craft breweries are starting to finally produce non- and low-alcohol offerings–especially in Europe and particularly Germany, which has a long history of “alkoholfrei” products.

Still, there’s a scientific reason why near beer isn’t as good. Believe it or not, non-beer begins its life as beer beer, before the alcohol content is stripped by heating it. But alcohol is a flavor itself, adding dryness and a boozy heat. Without it, you get many NA beers that are sweet and syrupy, with a cloying mouthfeel. Smartly, today’s top NA producers have combatted that flabby sugariness by adding bittering spices and plenty of hops. Still, all that effort may not be enough to get serious beer drinkers to try it. Which leads to one final joke:

What beer makes you look the most like an alcoholic if you drink it? 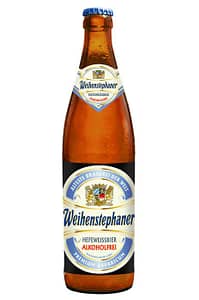 The oldest brewery in the world—it dates back to 1040!—had a lot of time to perfect its alkoholfrei product, which “feels” like real beer with a vibrant gold color and hazy heft to it. The beer likewise has the banana-y aromas that define a hefeweizen, as well as actual flavors: wheat, lemon, and hey, maybe even cloves. This one could actually trick a drinking pro who’s already a few beers deep. 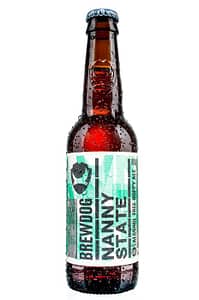 The gimmick-meisters who once made the world’s most alcoholic beer, the End of History, made this NA beer too. In fact, it’s their response to the haters. Nanny State is surely the hoppiest near beer around, with an unexpected punch of bitterness on the palate. It’s for IPA lovers who like to keep their wits about them, all while letting the world know they’re still mad Mayor Bloomberg took away Big Gulps.

Wouldja believe there’s an entire non-alcoholic brewery? Back when America was arguing over “tastes great” and “less filling” lite beer, these Germans decided to shout back, “We won’t getcha’ drunk either!” Instead of most breweries, which simply remove the alcohol from an already-brewed beer, Clausthaler decided to see if it could stop fermentation before it turned into alcohol. It worked! And now you won’t just be the boring guy not drinking at the party, you’ll be the guy who has an incredibly boring anecdote about how his alcohol-free beer was made.

This Danish gypsy brewer produces such a wide variety of beer types it’s perhaps not surprising it makes non-alcoholic beer too—in fact, it makes two of them. Drink’in the Sun is a summer wheat non-beer that is hazy, citrusy, and refreshing. Drink’in the Snow is winter-themed—darker, brewed with seasonal spices, and about as alcoholic as hot cocoa.

Marketed as a thirst-quencher, the famed Munich brauhaus claims its alkoholfrei product is “isotonic,” containing electrolytes, nutrients, and minerals. OK, so it’s probably not better for your post-workout hydration than a Gatorade, but it might be more fun to pour over your coach next time you win the Super Bowl.

As one of the few NA IPAs on planet Earth, this Dutch craft beer offers prickly carbonation with a citrusy aroma. Hazy and golden, the body and mouthfeel remain somewhat buttery and overly malty, though still quite terrific for the style. (The NA style, not the IPA one.)

This state-of-the-art German Kreativbrauerei (“creative brewery”) opened in Hamburg in 2015 with a name that looks like a hard-to-find street address. Though nearly 1,000 years younger than its country-mate Weihenstephaner, it nonetheless quickly figured out how to make a palatable non-alcoholic brew. IPAs are a bit of a rarity in Deutschland, but Kehrwider produces plenty—even those, like this one, that lack the ability to make you start dancing.

This ambitious Olsztyn craft brewery makes intriguing beers using locally farmed ingredients (like garlic and spelt!), and its near beer is no different. The Polish pale ale uses rye malts and Citra hops to give it honest-to-god flavor. Unfiltered—another rarity in the NA world—it’s hazy with a nice heft to it. At 1% ABV, it’s also a “boozier” offering, but you’d have to polish off a whole six-pack quickly to get even a modicum of a buzz.

You might see a non-alcoholic beer in your corner store, but you probably won’t see a kvass. The old world style—usually made per ancient method using dark rye bread with sugars, saps, fruit, and herbs—is rarely produced these days. That makes this Estonian NA kvass all the odder. Pitch black in color, the 0.5% beer is straight liquidized bread that’s been toasted until caramelized.

We suppose Americans should feel oddly jingoistic we aren’t any good at producing non-alcoholic beer. Having said that, with much of the above hard to find anywhere but specialty stores, this will be your easiest stateside option for barley-packed sobriety. All in all, it’s probably not much worse than Coors Light.

This site uses Akismet to reduce spam. Learn how your comment data is processed.

Trying to Stay Sober This Holiday Season? We’ve Got You Covered

8 Tips for Dealing With Anger When You’re Sober

If You Do Not Mindfully Set Boundaries, You Lose More Than Sleep

In this complex, rapidly changing world, is it possible to really set some boundaries between work and non-work time?